I would have to say that I think this is one of my favourite Jane Austen books.  The characters are intriguing and the humour, especially associated with Mary, made me chuckle. Captain Wentworth is definitely deserving of Anne, she is smart, funny and not prone to hysterics.  The break-up of their original engagement may not have been what they both wanted but sometimes it takes time and separation to realise what you have and what you want.  Anne was young, still a teenager, without guiding parents and siblings, she only had Lady Russell to turn to.  I think she did what was best and she knew deep in her heart that he would come back, otherwise she would have accepted Charles’ offer of marriage and not remained single for the next 12 years.

The ending came about a bit swift.  I have found this with several of Austen’s books.  There is such a big build up throughout the story and the romantic ending and conclusion to all that has happened is over in a matter of a pages.  I would have liked to have read about the confrontation with Mr Elliot and Mrs Clay prior to them departing.

At twenty-seven, Anne Elliot is no longer young and has few romantic prospects. Eight years earlier, she had been persuaded by her friend Lady Russell to break off her engagement to Frederick Wentworth, a handsome naval captain with neither fortune nor rank. What happens when they encounter each other again is movingly told in Jane Austen’s last completed novel. Set in the fashionable societies of Lyme Regis and Bath, Persuasion is a brilliant satire of vanity and pretension, but, above all, it is a love story tinged with the heartache of missed opportunities. 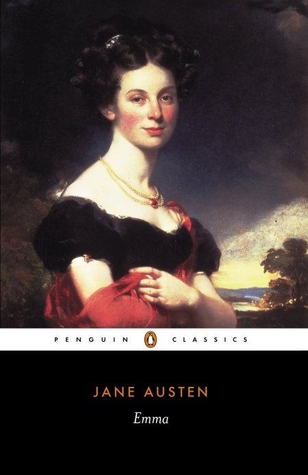 A charmingly delightful story about one woman’s unsuccessful matchmaking skills!

Emma Woodhouse has decided that, at the tender age of 20, her life is settled and content and therefore she has no need or desire to marry…ever.  She does, however feel the need for everyone else to settle down and live in perfect matrimonial harmony. And so begins her project of securing a husband (of distinguished pedigree) for her friend, Harriet Smith.

Although she has a tendency towards snobbery and arrogance, I actually really like the character of Emma.  She is easily led astray and may speak before she thinks but she does have a wonderful little conscience on her shoulder in the form of Mr Knightley.

There are many interesting characters in this story – Mr. & Mrs Weston, Frank Churchill, Jane Fairfax, Harriet Smith, Mrs & Miss Bates, Mr & Mrs John Knightley, and Mr George Knightley. Oh yeah! There are also a couple of not very nice ones, namely Mr & Mr Elton. How anyone could put up with the snide, rude and overbearing Mrs Elton is anyone’s guess.  Had the story been written now, I’m sure that Emma would have had a few choice words to say to Mrs Elton, but as it is everyone seems to just tolerate her, although I do believe that Mr Knightley does get a little payback on Mr Elton towards the end.

Emma’s attempts at matchmaking her friend, Harriet, all seem to backfire and being so wrapped up in her efforts she does not see what is right in front of her.  It is a beautiful story of friends-to-lovers, that moment when the lightning bolt finally strikes and everything becomes clear.  Mr Knightley is perfectly suited to Emma.  He is her calming influence and would do anything for her.  Is Emma deserving on Mr Knightley?  I think so.  Mr Knightley confesses that he has loved her since she was 12 years old, and I believe that if Emma thought hard about it she would realise that she has loved him for just as long.

This is a story filled with misunderstandings, secrets, and romance.  Love her or hate her, Emma is definitely one of my favourite romance heroines.

Clever, rich – and single – Emma Woodhouse is perfectly content with her life and sees no need for either love or marriage. Nothing, however, delights her more than interfering in the romantic lives of others. But when she ignores the warnings of her good friend Mr. Knightley and attempts to arrange a suitable match for her protegee Harriet Smith, her carefully laid plans soon unravel and have consequences that she never expected. With its imperfect but charming heroine and its witty and subtle exploration of relationships, Emma is often seen as Jane Austen’s most flawless work.

Perhaps not as well known as Jane Austen’s two previous books, Sense & Sensibility and Pride & Prejudice, Mansfield Park is still none the less enticing and intriguing.  The unrequited love that Fanny has for Edmund is evident from an early age and continues into adulthood.  The emotional pain and torment she experiences when Edmund becomes attracted to Mary Crawford and everyone becomes excited over her received proposal  from Henry Crawford,  can be felt through the pages.  As an outsider, Fanny observes things that others do not and she is very intuitive about human nature.  She has both the Crawford siblings pegged from the very start and, although there are signs of jealousy, it is far more about their character that she distrusts than her own feelings towards Edmund.

Fanny’s return home is a very emotional experience for her and not at all what she expected. There is little love shown from either of her parents and it is not surprising that her thoughts soon return to Mansfield Park and the extended family she has there.

My only criticism, if you can even call it that, is that the ending seemed to short.  The whole story is about Fanny’s feelings for Edmund but when she does finally ‘get her man’ it is such a small section at the very end.  I suppose in a way it does actually fit with Fanny’s character as it is very matter-of-fact with no heirs and graces, just like Fanny.

A very endearing and captivating story

Taken from the poverty of her parents’ home, Fanny Price is brought up with her rich cousins at Mansfield Park, acutely aware of her humble rank and with only her cousin Edmund as an ally. When Fanny’s uncle is absent in Antigua, Mary Crawford and her brother Henry arrive in the neighbourhood, bringing with them London glamour and a reckless taste for flirtation. As her female cousins vie for Henry’s attention, and even Edmund falls for Mary’s dazzling charms, only Fanny remains doubtful about the Crawfords’ influence and finds herself more isolated than ever. A subtle examination of social position and moral integrity, Mansfield Park is one of Jane Austen’s most profound works.

One of the many classics, and the first book written by Jane Austen, has deep and meaningful undertones. The title itself tells so much about the story to follow.

Elinor is the eldest of three sisters and by far the most sensible. She keeps her emotions private and always presents herself in the correct manner. She is in direct contrast to her younger sister, Marianne, who believes that emotions should be shown and not hidden away. Both girls feel the bitter taste of heartbreak but deal with it in completely different ways, Elinor hides her pain behind a closed-off mask, whereas Marianne is open and direct about her feelings.

The story is beautifully written and although the language used may seem old (it is over a hundred years old!) it is easy to follow and adds to the character of the story. The way that Austen describes the countryside, the cottage, the park etc. had me drawn into the world of the Dashwood’s and living in that time with horses, carriages, 2/3 day journeys to ‘town’ (London) and days spent reading or drawing.

The male characters in the book are as diverse as the female. On the one hand is Edward Ferrars, quiet and unassuming, and on the other is John Willoughby, ostentatious and forthright. My feelings are definitely mixed for Willoughby. He is believed to be a man of little integrity and the cause of much heartache to poor Marianne, and to some extent he is, but towards the end of the story, during a heart-to-heart with Elinor, my feelings for him did change. I am still far happier with the outcome for both the girls and believe that they would have lead much happier and enjoyable lives with the men they finally found love with.

Lovely story of love and heartbreak.

Marianne Dashwood wears her heart on her sleeve, and when she falls in love with the dashing but unsuitable John Willoughby she ignores her sister Elinor’s warning that her impulsive behaviour leaves her open to gossip and innuendo. Meanwhile Elinor, always sensitive to social convention, is struggling to conceal her own romantic disappointment, even from those closest to her. Through their parallel experience of love—and its threatened loss—the sisters learn that sense must mix with sensibility if they are to find personal happiness in a society where status and money govern the rules of love.

Miss Elizabeth Bennet, second of five daughters, prides herself on her judge of character and sensible decisions with regard to courtship and male attentiveness.  When first encountering Mr Darcy, she finds a very proud and aloof man who views those in country society as beneath him.  This is further enhanced by his unwillingness to dance and converse.

During the course of their encounters a love/hate relationship evolves which will bring both parties to question their current thoughts and opinions on not just themselves but those around them.

Can the prejudice of one see beyond the pride of the other?

This is most definitely a classic for a reason.  Jane Austen was a highly accomplished writer for her time and I often wonder what she would write if she were here today.

The story itself is built on the opinions and characteristics given by people, which influences the lives and loves of others.  Jane and Mr Bingley’s relationship is influenced by Mr Darcy and Miss Bingley, whilst Mr Darcy and Elizabeth have the opinions of her entire family, especially her mother, his aunt, and Mr Wickham to contend with.

The writing is as you could imagine for the era  and can take some getting used to, but the story line itself is interesting and engaging.  The characters are a mixed bunch and it does not shy away from the vices of the day, the behaviours of Mr Wickham and Lydia are good examples. How Elizabeth kept her calm around her mother is anyone’s guess, Mrs Bennet would test the patience of even Jane!  Some of the things that she says about Mr Darcy makes you wonder why he ever came back.

I will be honest, it can be slow in parts but there is a steady progression and build up to the final part.  The love that is discussed between the characters is very subtle and referred to with glances and smiles more than words.

I love a lot of the romances that are written nowadays but it is nice to go back to basics and read how love was over 200 years ago.