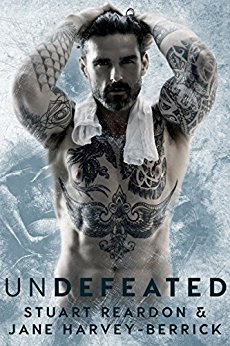 When your world crashes down…
When they all say you’re out…
When your body is broken…
I will rise.
I will return.
And I will be undefeated.

Nick Renshaw is the golden boy of British rugby. When a serious injury threatens his career, he starts to spiral downwards, a broken man.

Feeling abandoned and betrayed by those closest to him, he fights to restart his life. Maybe there’s someone out there who can help him. Maybe he can find his way back toward the light. Maybe … not.

Dr. Anna Scott might be the one person who can help Nick, but she has her own secrets. And when Nick’s past comes back to haunt them both, the enigmatic doctor is more vulnerable than she seems.

Broken and betrayed, the struggle to survive seems intolerable. Who will give in, and who will rise, undefeated?

I’ll be honest I’ve read some sports related romances before, mostly american football or baseball, and they have been ok but as my knowledge of sports is not great some of the references go a bit over my head.  Rugby is not a sport I know anything about (shh! don’t tell but I’m more a football (soccer) fan) but I had inspiration to read this book, namely that I had high hopes of meeting the man himself – Stuart Reardon – at RARE18 (see my post titled RARE18 London)

Anyway, getting back to the book. I loved it!  It is a wonderful, heart-wrenching tale of love, despair, victory and betrayal. Emotions run high and not just for the characters, I was all over the place.  One minute laughing at the locker room antics the next crying over the injustice of what was happening.

Nick’s character is witty, charming and loving, and it is obvious from the start that he does not belong with his girlfriend, Molly, but there are some very gritty moments that as I was reading I was giving it “no Nick, don’t be stupid” but everything happens for a reason.

Anna Scott is trying to prove herself against the mistakes of her past.  Her feelings for Nick are evident from the beginning but she tries to follow the rules.  Nick is a hard man to refuse! The connection between these two characters is undeniable but they have a rough journey ahead.

The story is beautifully written both with regards to the romance and the Rugby matches.  It was not hard to follow the game play and to be honest it almost had me watching Rugby to see if I understood what was happening…reading got in the way!

It was not hard to picture Stu as Nick, in fact it was essential (sigh!) however, my poor brain had to conjure up a twin for him when Stuart made a cameo appearance!

Highly recommended but for over 18’s only due to sexual content.

Looking forward to reading the next book – Model Boyfriend – due later this year.

I love to Read! Mostly romance (of all types) but I also enjoy murder mysteries, paranormal fantasy, sci-fi, comedy, pretty much anything. View all posts by mandy